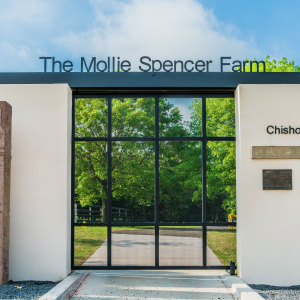 “There is no greater regional history to support than the Chisholm Trail, which came straight through what is now known today as Yukon, Oklahoma,” said Christian Keesee, President, Board of Trustees – Mollie Spencer Farm.

Clement was born in 1939, in Ada, Oklahoma. Her professional career found a home with the Kirkpatrick family after having served on the staff of Oklahoma Governor Henry Bellmon during his first term. John and Eleanor Kirkpatrick’s philanthropic vision required the help of individuals who could envision a project’s potential even in the midst of incremental progress.

Clement fostered the relationship between the Kirkpatrick family and the city of Yukon through her endless support of the Mollie Spencer Farm, Clement never approached anything with less than her best.  She also gave herself to many important programs such as helping FHA students throughout Canadian County, comforting incarcerated minors at the Juvenile Justice Center, and pursuing the humane treatment of animals through countless groups dedicated to their welfare.

Doug Sauter, Chisholm Trail Historical Preservation Society, said, “Dixie was a true cultural leader whose vision and commitment will forever be remembered by her friends and the community she loved.”

The Mollie Spencer Farm is one of the oldest pieces of continually owned family real estate in Oklahoma and was originally founded in 1894 as the Spencer Homestead. The 33-acre property was purchased by Mollie Spencer, whose husband, L. M. Spencer, and brother-in-law, A. N. Spencer, founded the town of Yukon in 1891. Today, the Mollie Spencer Farm provides educational opportunities that promote animal well-being, support regional history, and celebrate a sense of community pride in Yukon.

Public access at the Farm is only allowed during public events and scheduled activities. To learn more about the Mollie Spencer Farm, please call (405) 767-3702 or emailinfo@molliespencerfarm.org.